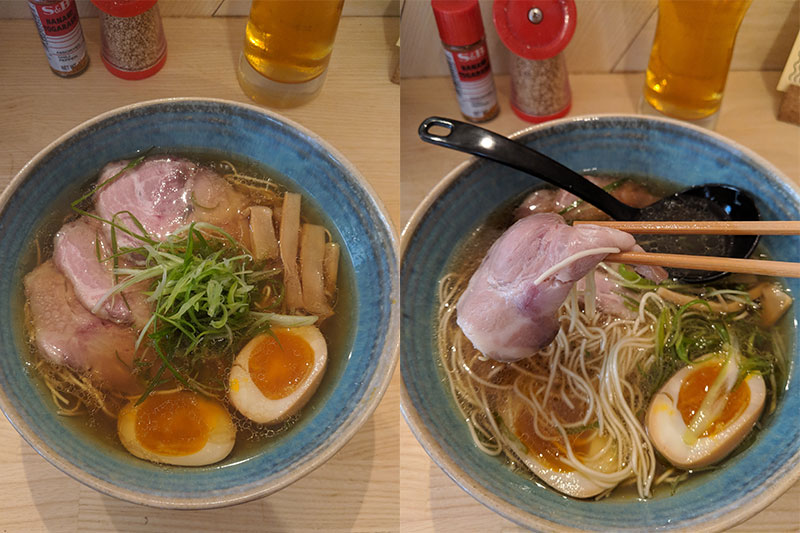 ‍(Note:prices in Norway are generally much higher than other countries)

There are not too many ramen shops in Norway to my knowledge. 3 that I know of, one in Bergen and two in Oslo and I have never been to any of them.

Today I was passing through Oslo with only 1 hour before I had to catch a connecting train. So I opened Google Maps and picked the one that was closest to the train station, Koie Ramen. I had a quick look at the number of reviews on Google and it seemed like a lot of people were giving it the thumbs up. Koie Ramen was a 10 min walk from the train station, which gave me plenty of time to slurp down a bowl before making dash back to catch my train. I ran out of the train station into a torrential down pour of rain. I had second thoughts for a moment, but decided to make a run for it. I was determined to get my bowl of ramen and what better than a cold rainy day for a nice hot bowl of ramen.

By the time I got there I was soaked, head to toe, my shoes were wet, it was soaking through to my socks but I didn't care. Not too many other people dared to go out in the rain as I pretty much had the place to my self, except for 1 or 2 other people. The place was nicely decorated, clean and minimalist. It had a couple of counters and a few long tables for larger groups of people. I was greeted by the waitress and took a seat up at the counter beside the open kitchen where pots of broth were simmering away.

The menu had the traditional 4 types of ramen, Shio, Shoyu, Tonkotsu and Miso, each served with variety of toppings with the option of adding extras. I didn't mess about and ordered the shoyu straight away with a Kirin beer to go with it. The chef came out, took my ticket and got to work making my bowl of ramen. Within a few minutes he personally came out and delivered the ramen to me which I though was nice touch.

He lay before me a beautiful bowl of golden chicken broth, slightly darkened by the shoyu tare. Floating on top was a nice layer of fat, not too much, you know when you can see those lovely bubbles of fat glistening on top of the soup. It was topped with some shredded scallion, 3 pieces of chashu, menma and ajitsuke tamago eggs cooked to perfection. I took a few pictures and dived in. The broth had a mild a hint of kombu, not too salty, but that perfect double soup balance. The chashu was a juicy, tender marbled piece of pork. The noodles were very thin but had a nice bite to them. I couldn't get enough of the soup, I could drink it all day. I slurped every drop and scraped every morsel out of the bowl.

Overall this was a extremely well executed bowl of ramen. Presentation was simple and elegant, just like that out of a traditional japanese ramen shop. I will definitely be coming back for more! I have a few hours to kill on Monday, so my plan is to starve myself and eat a bowl of shio first and then a bowl of tonkotsu.

I'll update this post in few days after I've had the shio and tonkotsu: For anyone travelling through Oslo, I highly recommend a visit to Koie Ramen !